The REAL cause of ischemic CVD

How to do Rath-Pauling Therapy

Why is Cure Ignored?

Why does it occur?

Weak Walls due to Scurvy

Where does injury occur?

Atherosclerosis Process - How and why

CHOLESTEROL DOES NOT CAUSE HEART DISEASE!

The misguided dietary fat-heart disease hypothesis (a.k.a. the "lipid hypothesis") was developed in the 1950s by Ancel Keys in an attempt to prove a causal link between dietary saturated fats and ischaemic cardiovascular disease (CVD), such as coronary heart disease (CHD) and heart attacks.    Keys cherry-picked data for his published analysis from only 6 countries, out of the 22 countries for which data was available at the time. This extremely flawed analysis began the push for the "margarine era" and the "low fat" diet by government health agencies, resulting in the obesity and diabetic epidemic of today, not-to-mention making tidy profits for the polyunsaturated vegetable seed oil industry.

Even in today's enlightened era, people are still encouraged to adjust their diet to include less saturated fat and cholesterol (a task that pharmaceutical companies know that we humans are doomed to fail and will thus turn to their drugs to solve the problem).

The lipid hypothesis relies on two parts (both UNPROVEN):

Blood cholesterol levels are not much affected by diet.    A survey of South Carolina adults found no correlation of blood cholesterol levels with consuming foods high in saturated fat and/or containing cholesterol, such as steak, sausages, bacon and other fatty meats, lard, eggs, cheese, whole milk and butter (Lackland et al, 1990).   Most people can give up these foods and their cholesterol may not budge a single point.   This is because the body can make as much as 1500 grams of cholesterol a day, which may be more than 6 times the amount in the diet.

Even Ancel Keys, the originator of the erroneous dietary fat / heart disease hypothesis (which was based on studies feeding oxidized cholesterol to rabbits, causing their cholesterol levels to skyrocket), admits there is no connection between dietary cholesterol and blood cholesterol:

Rabbits are herbivores . . . they are not supposed to eat cholesterol, but in contrast, we've been eating it for thousands of years.

Low-cholesterol (non-enjoyable) diet lowered the serum cholesterol by a mere 0 to 4%.    So concluded Ramsay and Jackson after reviewing 16 trials using diet in an attempt to lower cholesterol levels. (Ramsey et al, 1991)

No connection was found between the composition of the food and the cholesterol level of the blood in the 1950's Framington study.  Almost 1000 individuals were questioned in detail about their eating habits. Drs. William Kannel and Tavia Gordon, authors of the report, wrote: ”These findings suggest a cautionary note with respect to hypotheses relating diet to serum cholesterol levels. There is a considerable range of serum cholesterol levels within the Framingham Study Group. Something explains this inter-individual variation, but it is not diet.” Their results were never published.

High, middle or low blood-cholesterol groups ate the same kind of foods.   U. of Michegan meticulously analysed diets over a 24 hour period of >2000 individuals in Tecumseh, Michegan. No differences in dietary fats was found in the participants, when they were divided into 3 groups (low, middle, high), according to their cholesterol levels. Also of interest,those with a low blood cholesterol ate just as much saturated fat as did those with a high cholesterol. (Nichols et al, 1976)

After 60 years of trying, the proponents of the diet-heart hypothesis have still not been able to prove that dietary saturated fat or cholesterol has anything to do with heart disease.

The truth: "Elevated blood cholesterol levels "are weakly correlated with" instead of "causes" 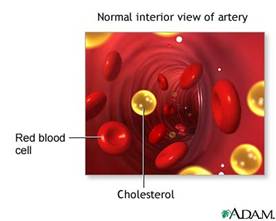 heart disease" (which has quite a different meaning)

There have been literally hundreds of studies done on the association between blood cholesterol and heart disease. Some found a weak correlation, others a weak non-correlation

LDL cholesterol (which is oxidized in the process of healing any damage to a weaked arterial wall) and saturated fat typically constitute less than 25% of arterial plaque.

A Massachusetts, U.S. study ongoing since 1948, directed by the National Heart Institute; originally enrolled 5209 men and women, who had no signs of CVD; participants tested every 2 years. In 1971, 5124 of the original participants' adult children and their spouses were also enrolled in the study.

The truth: Dietary saturated fat is not associated with cardiovascular/heart disease

(including such as: coronary heart disease, heart attacks, strokes, HBP)

-   23 nutritional factors were found to be moderately/strongly associated with heart disease, but . . . Saturated fat was not one of them!    So found researchers from McMaster University in 2009, who undertook "a systematic review of evidence linking a wide variety of nutritional factors and heart disease", publishing their results in the Archives of Internal Medicine. They analyzed146 research studies involving millions of people over a span> 60 years.

-   The combined results of several epidemiologic studies showed that there is no significant evidence for concluding that dietary saturated fat is associated with an increased risk of cardiovascular disease (ischaemic CVD) .     A study published in the Jan. 2010 Journal of Clinical Nutrition, which analyzed the association of dietary saturated fat with risk of coronary heart disease, stroke or any other  cardiovascular disease in 21 epidemiological studies (these look for associations between things):

5-23 years of follow-up of 347,747 subjects determined that only 11,006 developed CHD or stroke. Consideration of age, sex, and study quality did not change the results.

-   As heart-disease rates skyrocketed in the mid-1900s, animal fat consumption was actually going down.   While vegetable oil (with its inherent excessive omega-6 content) was being consumed in dramatically increasing amounts.

With the obvious flaws in the theory, some amendments were necessary.  Enter center stage - HDL and LDL cholesterol. LDL (the supposed "bad" guy) carries cholesterol to tissues, and if it hangs around it ends up getting oxidized. HDL (called the "good"guy), carries excess cholesterol back to the liver from the tissues to be recycled. The amended theory is that the oxidation of LDL in the blood begins the atherosclerosis process, leading to heart disease - it makes sense. Keep your LDL low and your HDL high and you're good to go! The theory vindicates most cholesterol, but vilifies LDL cholesterol (and its buddy saturated fat).

HDL, LDL and total cholesterol values do provide some secondary indicators of a problem

TWO RATIOS that DO PROVIDE GOOD INDICATORS of a problem:

The medical profession and articles all over the internet continue to espouse the largely unfounded dietary guidelines.   For example:

The body has numerous essential uses for cholesterol

When you consume cholesterol, the body doesn't need to make as much.

DISCLAIMER: The content on this website is intended for informational, and educational purposes only and not as a substitute for the medical advice, treatment or diagnosis of a licensed health professional. The author of this website is a researcher, not a health professional, and shall in no event be held liable to any party for any direct, indirect, special, incidental, punitive or other damages arising from any use of the content of this website. Any references to health benefits of specifically named products on this site are this website author's sole opinion and are not approved or supported by their manufacturers or distributors.
NEWSTARTS CHART