How to reduce sugar intake

How to overcome sugar cravings

ARE THESE HEALTHY SWEETENERS?

Your body is not "fooled" by sweetness with 0 calories!

A 2014 study (Nature, 2014) revealed a direct cause and effect relationship between consuming Non-nutritive Artificial Sweeteners (NAS) and developing elevated levels of HbA1C ( a long-term measure of blood sugar) compared to non-users or occasional users of NAS.   This eye-opening study with both mice and humans found that NAS directly modulate the microbiota to induce glucose intolerance (i.e. prediabetes).

Artificial sweetener use correlates with an increase in obesity 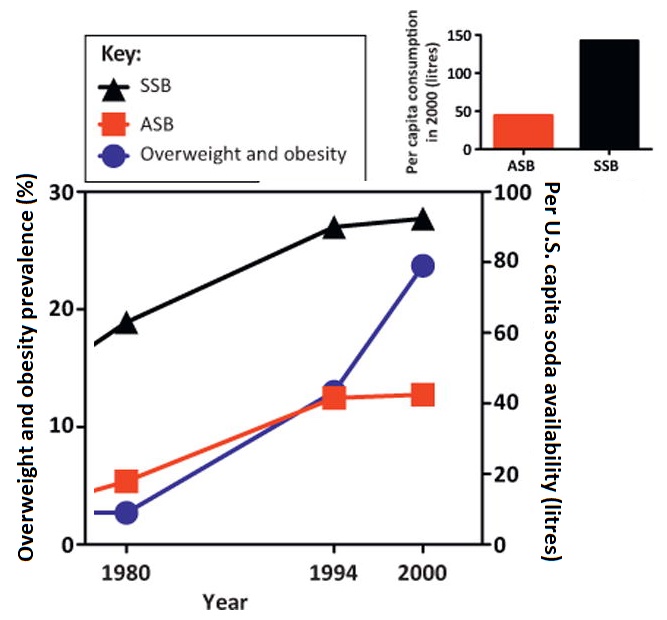 ASB and SSB beverage consumption associated with  percentage of obesity / being overweight in U.S. population

Although rate of increase in both artificial and sugar sweetened beverage consumption has much declined since the mid-90's, obesity rates continue to rise sharply, indicating additional factors are involved.

•  3,682 adults over 7-8 yrs during 1980's had consistently higher BMIs at the follow-up.   Average BMI gain was +1.01 kg/m2 for control and 1.78 kg/m2 for people in the third quartile for artificially sweetened beverage consumption.

•  Participants who drank more than 21 diet drinks per week were almost twice as likely to become overweight or obese as people who didn't drink diet soda. (Fowler et al, 2008)

•  Saccharin use was also associated with eight-year weight gain in 31,940 women from the Nurses' Health Study conducted in the 1970s

•  Each daily serving of diet beverage increased BMI by 0.16 kg/m2

•  BMI did not decrease after 25 weeks of substituting diet beverages for sugar-sweetened beverages in 103 adolescents in a randomized controlled trial, except among the heaviest participants (Ebbeling et al, 2006)

Rat feeding study found that breaking the link between the sweet taste of saccharin and the anticipated high calorie food changed the body's ability to control food intake.

•   Rats were fed either saccharin or glucose sweetened yogurt.    The rats that ate the saccharin-sweetened yogurt consumed more calories, put on more weight, gained more body fat, and did not cut back on their calorie consumption in the longer term  (Swithers & Davidson, 2008)

At the end of a 24 week study, rats consuming sucralose gained weight compared to the ones that didn't. (Qing, 2010)

81 rats eating food at will gained the same weight as controls when also drinking saccharin solution, but gained significant weight when  drinking 11% sucrose solution instead of saccharin solution. When the sweetened solutions were switched, obese sucrose-drinking rats lost weight during the next 8 weeks while rats previously on saccharin gained weight rapidly. It is fairly obvious that weight gain (weight loss) would occur if adding (or removing) extra sucrose calories. (Porikos & Koopmans, 1988)


DISCLAIMER: The content on this website is intended for informational, and educational purposes only and not as a substitute for the medical advice, treatment or diagnosis of a licensed health professional. The author of this website is a researcher, not a health professional, and shall in no event be held liable to any party for any direct, indirect, special, incidental, punitive or other damages arising from any use of the content of this website. Any references to health benefits of specifically named products on this site are this website author's sole opinion and are not approved or supported by their manufacturers or distributors.
NEWSTARTS CHART