Steroid hormones are a subset of the body's hormones -  Lipids ultimately derived from cholesterol. Steroid hormones include both those produced by the body and those synthetically-produced in an attempt to mimic the naturally produced steroids.

What do they do? - Steroid hormones help control metabolism, inflammation, immune functions, salt and water balance and are involved in the the development of sexual characteristics and the ability to fight illness and injury.

The steroid hormones have the following structure as their nucleus: 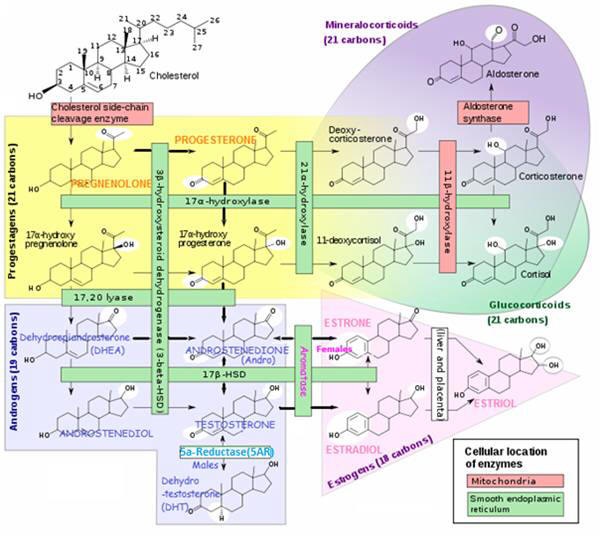 -   Small, non-water soluble molecules that must be transported in the blood bound to a protein serum globulin - Some hormones are transported by specific transport proteins, for example, sex hormone binding globulin (SHBG) binds and transports TESTOSTERONE and ESTRADIOL;

-   Being fat-soluble, they can easily pass through the cell membrane -where they can then combine with a protein receptor in either the cytoplasm or nucleus, depending on the hormone, to cause changes within the cell.

* Refers to # of carbons in molecule skeleton

** Qualify as hormones, since they are: (a) made in certain cells, (b) carried in the blood(c) affect gene transcription in target cells; technically they are sterols not steroids

Where are steroid hormones produced?

How Does the Body make Steroid Hormones?

-   Steroid hormones are synthesized as needed using cholesterol (mostly stored intracellularly in the tissue of origin) as the ultimate precursor, in response to appropriate signals (Luteinizing Hormone-stimulated signal transduction - the intracellular biochemical reactions that occur after stimulation of the LH membrane-bound receptor up until the initiation of cholesterol transport to the mitochondria) - the precursor is moved from storage depots to the mitochondria and smooth endoplasmic reticulum, where a series of enzymes (E.g, isomerases, dehydrogenases) rapidly convert the molecule to the appropriate steroid hormone.

-   Limiting factor for steroid hormone secretion is the rate of production - Steroid hormones require a stimulus for production, but once synthesized, their release occurs by passive diffusion.

-    Steroid hormone availability is thus dependent on their continual biosynthesis - to enable secretion to occur when needed for a physiological response or developmental change to occur.

•  Chronic stress, disease or nutritional status - secretion and activity of a particular hormone may be adjusted upward or downward in response to challenges such as chronic stress, disease, or a poor diet (excess sugar / refined starches, trans-fatty acids, lack of needed nutrients such as Omega-3 fats, a full range of essential amino acids, vitamins, minerals, etc.).

•  Cholesterol availability - a constant supply of cholesterol is necessary for enzyme-catalysed steroid hormone production since they are manufactured on an “as needed”basis - unlike protein/polypeptide hormones, steroid hormones are not stored in large amounts - one of several reasons for not being too eager to lower your cholesterol levels.

•  StAR (Steroid Acute Regulator) protein transports cholesterol from the outer to the inner mitochondrial membrane - a rate-limiting step of steroidogenesis -cholesterol is carried between the membranes by the StAR protein and steroidogenesis is controlled through regulation of its production.

▲  SF-1 (Steroidogenic Factor-1) regulates the basal and hormone-stimulated expression of the StAR gene, which codes the StAR protein that transfers cholesterol into mitochondria.

To make them water-soluble in the blood, most steroid hormones are bound to carrier proteins, and only a small fraction circulates “free”or unbound - A rapid equilibrium exists between protein-bound and unbound steroid in extracellular fluid.

-   Protein-bound (enveloped by specific globulins or albumin) - when steroid hormones circulate through the liver, they eventually become protein-bound a process that not only impedes their bio-availability but also makes them water soluble, thus facilitating their excretion in urine.

▪ Corticosteroid Binding Globulin (CBG) for PROGESTERONE , CORTISOL (and other corticosteroids);

-   Unbound / “Free”- these are presumed to be the biologically active fraction available for entering targets cell through their lipid bilayer. Steroid hormones carry their message to cells by leaving the blood flow at capillaries to enter cells where they bond with specific hormone receptors.

The primary function of steroid hormones is to affect an alteration in the rate of transcription of specific genes in target cells, by either increasing or decreasing their expression - The steroid hormone usually diffuses through the plasma membrane, through the cytoplasm and into the nucleus, where it binds to a receptor protein. In turn, this activates a portion of DNA that turns on specific genes.

There are several classes of steroid receptors - those for glucocorticoids, mineralocorticoids, sex steroids (which includes the androgens, estrogens and progestagens). Steroid receptors comprise a family of related proteins that also show homology to receptors for the thyroid hormones and vitamin D.

The receptor has regions or domains that carry out specific tasks:

1. One for recognition and binding of the steroid

2. Another for binding to a specific region on chromosomal DNA

3. A third for helping regulate the transcriptional complex.

Steroid action is relatively slow in onset (hours) - but may be long lasting because of the duration of production and half-lives of the messenger RNA and proteins induced in target cells.

Excretion in the urine, bile or feces - steroid hormones that are excreted in the bile may be hydrolyzed in the G.I. tract and then reabsorbed back into the body through the portal system circulation;

Steroids in the blood are eliminated by metabolism in the liver - where reduced forms are produced and subsequently conjugated to glucuronic acid and sulfate. These metabolites are freely soluble in blood and are eliminated from the body via the kidneys and the GI tract.